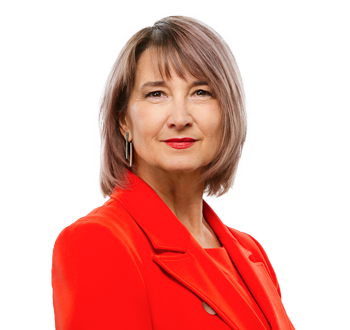 Born and raised in Switzerland, Esther studied in her country of origin until she obtained her bachelor's degree in administration. Afterwards, her interest for Canada's open mindedness brought her to Vancouver in 1979 where she began her career in property management and in small businesses recovery.

As she was looking to move forward as an entrepreneur woman, she became implicated in the Securities industry in 1984 following her arrival in Québec. Her background and multilinguistic abilities served to lower restrictions pertaining to international borders and allowed her to integrate her comprehension of international markets into her management vision for the benefit of her clients.

True to her motto ''always learn to better serve'' she is a financial planner since 1998. Recognized many times during her career, Esther has recently been introduced to the 2022 President Club. The President Club recognition is awarded to Wealth Advisors who reach a high level of Excellence within the firm.

To keep up to date with the industry's constant changes, her priority remains the unending development of her expertise. In early 2014, she obtained the tittle of wealth manager.

Proud of her loyal clientele, Esther is always available to better serve it.