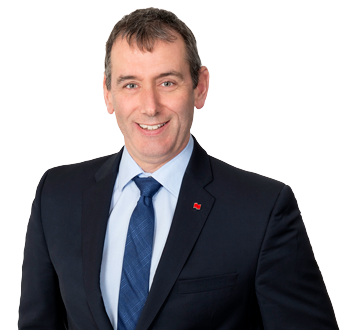 Holder of multiple awards and distinctions from National Bank Financial, Michel is well known within the wealth management industry for his professionalism, his corporate interpersonal relationship management, his expertise, and his ability to simplify complex notions.

Michel received a baccalaureate in finance from the HEC Montréal and has received a license as Chartered Investment Manager (CIM). He has been working for National Bank Financial for more than 27 years.

His curiosity combined with a natural interest in a variety of subjects and an in depth knowledge of financial markets allow him continuously to innovate and adapt his portfolio management strategies for his numerous clients.

Deeply involved in his community, Michel works closely with several causes, and notably with the CN Challenge for the Sick Kids Hospital of Eastern Ontario and through the creation of an Excellence Scholarship at the Collège La Cité.

When he's not in the office, Michel can often be found biking along the roads of the National Capital Region. He also loves exploring the rest of the world with his Significant Other and his three children to absorb other cultures and discover other hidden gems.