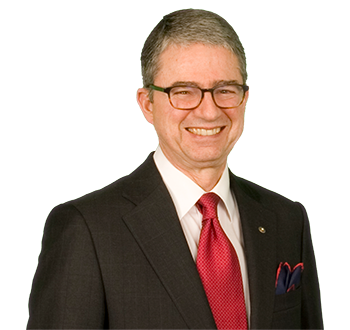 David is an experienced investment professional with over thirty years as an Investment Advisor. David graduated from The University of Toronto with a degree in both economics and urban studies. After spending several years with one of Canada’s largest trust companies specializing in estate and investment planning, David joined a major investment firm and has been in the investment business ever since. David’s practice has grown due to his conservative approach to investing and the referrals he has gained from existing clients. His greatest satisfaction comes from his client’s financial success and the long-term relationship he develops with each one.

David is proud of his deep roots in the community as a third generation Hamiltonian. He believes strongly in giving back and is the recipient of the 2018 Social Commitment Award for the Southwestern Ontario region of National Bank Financial. This award recognizes Investment Advisors who have been effective in espousing the values of social responsibility within their respective communities.

David has been involved with the Hamilton Health Sciences Foundation and Hamilton Civics Hospital Foundation for over 32 years serving the past thirteen years as Chair of Finance, and Treasurer and Chair of the Hamilton General Hospital Foundation. Two years ago, David received the Ontario Volunteer Service Award recognizing his 30 years of volunteerism with the HHSF. David has been deeply involved with Hillfield-Strathallan College as a Member of the Alumni Committee, Board of Governors, and Chair of the Board of Trustees. David was recently named a Builder of the College for his many years of dedication and service.  He has also remained an active member of the Rotary Club of Hamilton for over 30 years including serving as its president.

David is married to Gwynneth and they have a son, Ben, who lives in Whitehorse, Yukon with his wife, Andrea, and their son, Rowan.