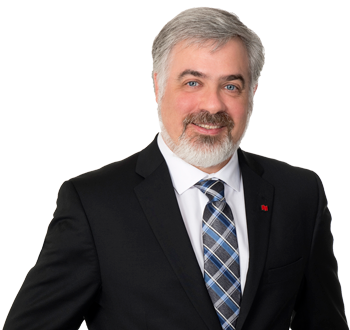 Louis-François holds a diploma in actuarial science from Université Laval, is a Personal Financial Planner and Chartered Investment Manager, and has worked as an Wealth Advisor at National Bank Financial for more than 25 years.

Prior to joining National Bank Financial, Louis-François worked as an Analyst for the Régie des rentes du Québec and as an Assistant Actuary for the Office of the Superintendent of Financial Institutions Canada.
He stands out for his analytical mindset and listening skills.

Community involvement is important for Louis-François; he’s previously coached the Aylmer soccer club and served as a member of its Board of Directors.

When he’s not at work, Louis-François can be found spending time with his wife and two kids or cooking a homemade meal. He’s also a travel enthusiast with a special interest in cultural and heritage tours. He’s visited Europe a number of times, mainly in Italy.